I received a call from Mountain Vibez to be part of a company that wants to give back. Not only giveback but do some good to where you’re putting someone else before you, for a day by giving back to a young man/woman that has struggled with life in different ways that words couldn’t explain for them and their stories. As well as showing them not just how to snowboard but how you express yourself through snowboarding, also use snowboarding as an outlet to enjoy the mountains.

I was on board to work with Mountain Vibez and give back because even in my life right now can be crazy and hectic but if you can do a little good it goes a long way! YES, I am a paid RIDER but not a paid WRITER so these are all my own words from my own experience!

December 2nd, 2017 was the day of the first event of giving back to kids through a company called SOS outreach with Mountain Vibez being the name I came to represent as well as myself! I got the privilege of partnering with a 14yr old by the name if Eli! He had the Cosmo Kramer hair style which I liked since Seinfeld was a show I grew up on and he from his face expression looked like it was too early in the morning for him to be up. Instantly I became loud and full of energy for him at like 8:45am hahaha. We got to get to know each other and as the day went on, I took the approach of not telling him exactly who I was and that my name was Jonathan McDonald and I just snowboard and love to ride! He said “that’s cool” and thought nothing of it, which I thought was mad dope hahaha. As we road he started to notice how crazy I am on a snowboard (physically and verbally) he gave me some compliments and said “you’re talented”. I said thank you but today isn’t about me it’s about you, would you like to learn anything? He wasn’t sure what to learn since it was also his and almost every kids first day back on the snow for the season and didn’t want to get hurt. I new exactly what tricks to teach him because it took me right back to when I first started.

When I first started I wanted to have as much fun as possible. So i started off by asking him, “Do you scream when you snowboard?” He looked at me so funny like I was asking him “Do you talk when playing golf?” Hahaha and said no, I told him it feels good to scream in a place that you are having fun and all your cares go away. For me it’s the mountain. Then I asked him if he knew how to “Spray big clouds?” He said no! I instantly showed him in a couple runs how to spray by using the side of the run to do slashes. As we were riding around the hill having a blast, I also remembered to make sure he knew on hill riding safety, like making sure you look up hill and not get in other people lanes so you don’t hit anyone and they have a great day, Eli was an expert at it, but everyone else on hill wasn’t, he got hit twice, but was such a good camper he even made sure the person that hit him was even ok! And that for me took me back. WHY? Because the me, before I saw Eli help a stranger he didn’t even know, would have been exchanging words without thinking. And THAT’S NOT WHAT IT’S ALL ABOUT! It’s about showing love and compassion and helping when one falls down, whether you know them or not! I instantly looked at Eli not as a 14yr old but as a young man with the mind of a legal adult, because of how he handled himself all day not just in one situation.

Shortly the day came to an end faster than Eli and myself wanted because we clicked and had so much fun, by the end of the day I felt like I had an identical me screaming his head off on hill cheesing from ear to ear loving life and slashing every chance we both got to on our “second to last lap”.

When we got down to the bottom, we gave one good scream from deep down in our glory soul and high fived happy about the day! We went back to close the day out with everyone, we had to say bye but it was really cool because at the end of the day he told his mom “I think MAMBA rubbed off on me!” 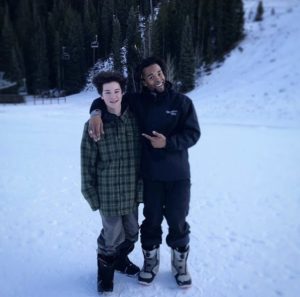 Love to write? Love to snowboard? Want to write for Mountain Vibez? Send us your blog post and pictures here! We’ll be featuring a new blog writer every month!